Enyimba FC of got back to winning ways in the CAF Confederations Cup with a gruelling victory over San Pedro of Cote'divoire. Both sides matched each other for size in the opening minutes of the game but could not find a breakthrough.

In the 3rd minute, San Pedro had a goal disallowed for offside after Kouame Kramo put the ball past Afelokhai. That seemed to energize the agile Ivorians who played more confidently and had shots on goal but had Afelokhai to beat. In the 17th minute, San Pedro came close to getting the opener as Kouame's cross met Soumaro in the box but he missed the glorious chance with just Afelokhai before him and a simple touch could have made the difference. Enyimba's first shot on target came in the 19th minute as Stanley let a shot fly from about 25 yards but Eleazar was on hand to save that effort. Dimgba came close again when he cut in from the left but he shot wide.

San Pedro soon got their rythm back as they pressed Enyimba whose midfield was flat. In the 32nd minute, Kouame got a defence splitting pass but shot wide from close range. Two minutes later, the ever menacing Kouame dribbled his way past the Enyimba defence but shot wide with Afelokhai at his mercy.

In the last five minutes, Enyimba turned the game around as they piled the heat of the afternoon's sun on San Pedro. In the 41st minute, a beautiful interchange of passes between Bala and Samson Obi opened up space as Bala released a low cross into the box but Mbaoma arrived late to connect. In a dramatic last two minutes, Eleazar Ira had to be at his best to deny Mbaoma a goal from outside the box and also Stanley Dimgba whose attempt on goal was saved by the busy goalkeeper.

In the second half, Enyimba came out the more determined of both sides and were bolstered with the introduction of Anayo Iwuala for Stanley Dimgba and Martin Usule for Samson Obi. In the 55th minute, Ifeanyi Anaemena was injured and was replaced by Abiodun Adebayo. Enyimba's breakthrough came in the 64th minute when the rebound of Oladapo's freekick the freekick fell to Martins Usule in a crowded box then he fired a shot that beat Eleazar in goal for San Pedro.

In the final minutes of the game, Enyimba had injury woes as Darkwah had an injury scare and shook it off, while Reuben Bala was stretched off but returned and Dare was off but later returned.

With this result, Enyimba now has 3 points from two group games 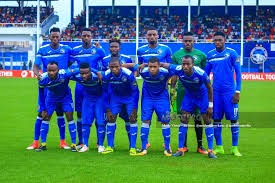