800,000 Nigerians commit depression-based suicide yearly - 21 THINGS you must know about this ILL

Depression is global problem, with 400 million people suffering from it. However, 12 percent of this bunch, making 48 million souls, are Nigerians. A professor of psychiatry, Joseph Adeyemi, has said that no fewer than 800,000 people commit suicide yearly due to depression, yet policies on mental challenges remain archaic. Depression is something a lot of us take lightly. Mental health isn’t given as much importance in this country as it should, and that needs to change. Recently, a friend summoned strength to opened up about her battle with depression on Facebook, and it just brought the reality of this ill to fore again.

Here are a few very important things we all need to educate ourselves about, regarding the whims and caprice of depression.

PS: Kindly press the "Share Button" to let others know too. A depressed person is constantly feeling worthless, hopeless, anxious, angry, and sad- even to the level of being suicidal. It’s a lot deeper than feeling blue. And it affects more than 100 million people worldwide.

2. It’s not just a state of mind; it can even show physically Among other things, a depressed person can have body aches, headaches, high blood pressure, fatigue, and feeling of constant tiredness.

3. Watch out for simple symptoms Depression is a big deal, but the symptoms can be seen in the simplest of things- lack of concentration, being extremely forgetful about things, irritability, wanting to eat either all the time or never, being overly negative all the time, and general loss of enthusiasm in activities. One of the most important things you should know about depression is that it is a disease, and it is very real. Those who struggle with depression should be treated with the same compassion that is offered to those suffering from any other "socially acceptable" illness. Through brain scans experts have detected that the frontal lobes of those with depression display lower activity levels than those in non-depressed individuals. So, even though you may not be able to detect it with the naked eye, it's existence should not be discredited.

5. People of any age can have it A common misconception people have is that depression can hit someone at a later age in life. However, 1 out of 10 adolescents are likely to have a depressive disorder by the time they’re 18 years of age. Yes, depression among young adults is very prevalent.

6. The levels of depression can range from mild to severe, to clinical There are different kinds of depression that hit people differently. Some people may have mild depression that normally would hit them after a sudden big change in their lives, like post-partum depression prevalent in new mothers, or for some, it could turn into major depression over a period of time. Understand the meaning of clinical depression here.

7. It sometimes leads to Other Problems Depression that is left untreated can increase the risk of developing other illnesses, including heart disease, stroke, respiratory problems and conditions of the nervous system. Physical ailments that you already have can also be made worse. Something as seemingly simple as getting out of bed can be a difficult, and sometimes almost impossible feat, when you are depressed. The assumption that depression only affects the mind is a huge misconception. Though it begins in the mind, depression affects you as a whole - mentally, emotionally, physically and even spiritually.

8. It is incredibly hard to live with depression

Something as simple as waking up every morning becomes difficult for a person suffering from depression. While some feel extremely vulnerable most of the time, some depressed souls feel numb-devoid of any emotion. And they can’t control it.

9. And no, it should not be considered a taboo

Because depression isn’t talked about in a nation like ours, it becomes really difficult for people to even consider that they might have a problem, let alone get help in order to get better. It’s about time we start changing our mindset and prejudices about mental health, and take action.

10. Even the happiest of people can have this painful problem; Nobody is Immune. People may not seem depressed on the outside, but it’s the small things that stand out as a difference between healthy people, and depressed people. Plus, it is not selective at all. Whether you are rich, poor, introverted, extroverted, black, white, woman or man, depression does not discriminate. You can have perfect hair and be the life of the party with a flock of friends and still be depressed. Depression is one of the most common mental disorders in the world. There is no common denominator.

In fact, there is nothing more saddening for a depressed person than to hear statements like these. Again, it’s not under their control that they feel how they feel, and they spend most of their time trying to understand why. You Can't Just "Snap out of It". Let me reiterate that depression is a disease. To ask someone to snap out of depression is like asking them to snap out of any other illness, like the flu or diabetes. If you have depression you are not weak, lazy, or trying to get attention. What you are feeling is valid and it matters. 12. If you see signs of your loved ones’ behaviour change, you should consider depression to be one of the causes

It might get really difficult to understand if a teenager is only acting out because of the hormones, or out of depression. Being a teenager is really difficult as it is; there’s immense peer pressure that has the power to shape their views and opinions. Depression can make a teenager angry, overly rebellious, and have them throw tantrums. Not to mention their grades being affected, and their overall behaviour towards other people changing drastically. Sometimes there is one. Sometimes there isn't. You can have good days and bad days, just like everybody else. You don't need to justify or rationalize the cause of your depression to anyone. Not even to yourself. No one should have to. It just is. The best thing you can do for a person who suffers from depression is to believe them.

14. Major depression can actually change the functioning of your brain Yes, depression can have staggering effects on the brain, and make people function differently overall. This short video explains how. They keep telling themselves that they don’t need anyone’s help, mainly because they don’t want to be a burden on anyone. This stems from the fact that they feel worthless more often than not, and statements like these are very common among depressed people.

16. Even the smallest of setbacks in life can have a deep impact on a depressed person It might be merely an exam in college in which they didn’t fair well, but a depressed person’s world can shatter over the smallest of things. Needless to say, criticism doesn’t go well with them either. Not because they’re bad sports, but because they’re already incredibly low on self-esteem, and this only serves as a trigger for them to feel that they really are useless.

17. And they will often feel like they’re the worst people in the world

They consider themselves bad people because they’re constantly wondering why they don’t have their life together. The cycle is a viscous one- they’ll feel bad about something, do something impulsive, regret it, and blame themselves all over again.

18. Some might even say they’re just being realistic about the world, but more often than not, that’s just the depression talking Depressed people often talk very realistically, saying things like, “this is how the world is”, and “what is the point of living anyway when everything is made up?” They might think that it’s a personality they’ve developed after a bad incident (usually an incident that has triggered their depression), but it’s just the sickness talking. If you have a friend/loved one whose behaviour you have seen change drastically over time into someone like this, don’t hesitate to consider talking to them about it.

19. There are ways to fix depression, and to come out of it healthy - There is No QUICK Fix ... but There is a Fix Depressed people need to be assured that their way of thinking is just because of the sickness. If they’ve already accepted the fact that they’re depressed, their family and friends need to show support, and let them know that you’ve got their back. It’s dicey if you know that the person is depressed and the patient doesn’t, they need to be handled with utmost care.

Anything worth having is worth fighting for. This is especially true of yourself and your well-being. Depression is not something you can recover from overnight. You can think happy thoughts and still be unhappy. You can be mindful and meditate and still be restless. You can boost your endorphins through yoga and exercise and still be listless. You can eliminate gluten, dairy, caffeine, alcohol, and sugar from your diet and still be lethargic. And medications, though in some cases can help with the healing process, do not provide all the answers. That's because there is no one size fits all answer. Everyone is different, as is everyone's road to recovery. There is not one cure. BUT, there ARE cures! It just takes the will to change, to fight for the most important thing you have in your life; yourself! There IS hope!

20. The key to helping someone get out of it is unadulterated and unfazed support, and love As said, there are medical facilities available for mental illnesses, and this can be cured.

21. And finally, depression can make one feel isolated and lonely, which is a feeling far from reality

A depressed person may feel like they’re all alone in this world with no one who cares. But, it’s only the matter of a little external help till they realize that this is not true. There are millions of people out there who feel the same way, and all they need to know is that this will pass. It might be difficult in the beginning, but then, the path to recovery is never easy.

Demi Lovato, J.K. Rowling, Oprah Winfrey, and Eric Clapton are just a few of the many famous personalities who have suffered, and have eventually gotten out of depression, victorious.

If you’re suffering from depression and you’re reading this, the one thing you need to know is that getting better is a viable option, and you will get better. You will be yourself again.

Conclusion - There is Hope

One more time - THERE IS HOPE! Say it to anyone you know of who turns to you for help. Say it to yourself! And most importantly, BELIEVE IT! Though you may be depressed, there is an ending to the suffering. An end where you LIVE and you live a fulfilled and happy life. Though positive thinking, meditation, yoga, exercise, being outdoors, a proactive diet, therapy and medication aren't the magic overnight solution they do help change things gradually. There are no small victories. Every accomplishment and every step you take to heal should be celebrated. You can also reach beyond yourself, beyond the fear, and connect with others who have felt the same way. 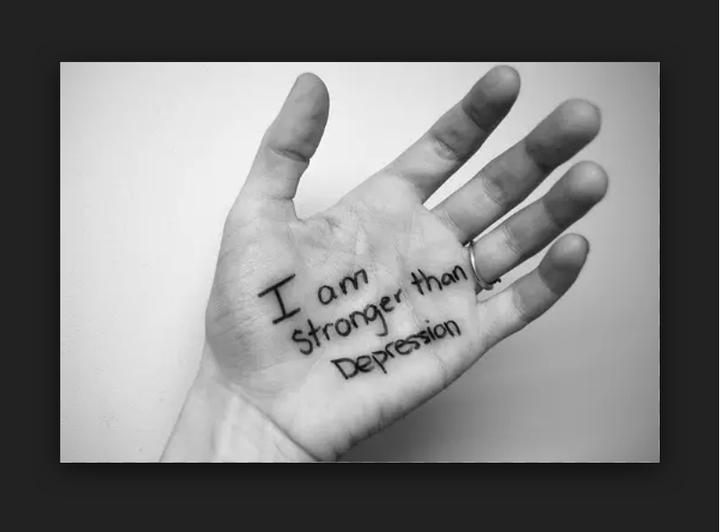